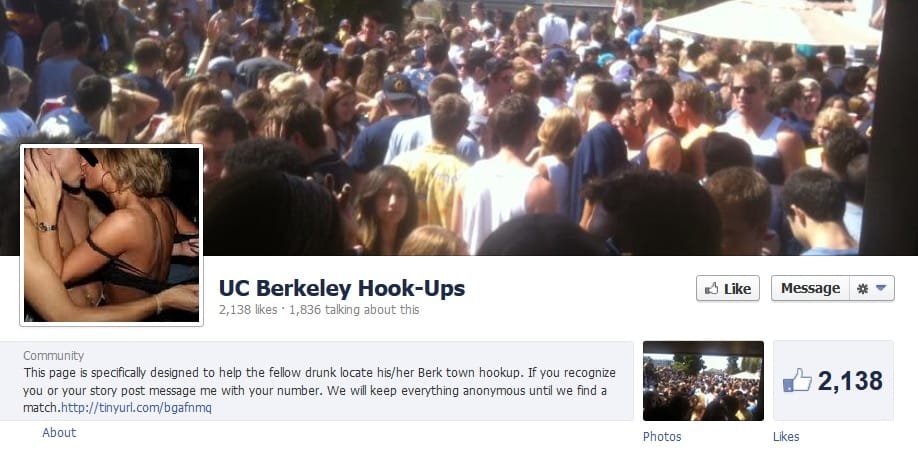 Bro, who’d you hook up with last weekend? If you’re a UC Berkeley student, you can actually figure it out by checking a Facebook page dedicated to solving mystery hookups.

UC Berkeley Hook-Ups was made for Berkeley students who want to “possibly hook up with a certain person again after a wild night, but have no means of reconnecting because no information was exchanged,” one of the page admins told me through a personal Facebook message.

“This page is specifically designed to help the fellow drunk locate his/her Berk town hookup,” the about section of the page says. “If you recognize you or your story post message me with your number.

It’s working, too. The page is enjoying daily usage and has amassed 2,138 “likes” thus far.

So how does it work?

“Basically, just send us your stories via googledoc or message, and we post it, and if someone reads it that could be the person written about, the would like the post, or comment on it. Then it’s up to the person who’s story we posted to go and see the possible candidates. Messages have proven to be easier, because we have an easier way of reconnecting the people. The google doc is completely anonymous, so we don’t even know who sends us the stories,” the admin told me.

I complimented the UC Berkeley Hook-Ups admin for the focus on privacy. The page could devolve into an un-organized mess of a party thread, which is something they were keen to avoid from the start.

“Basically, we don’t want this page heading in a direction that it wasn’t intended for. We want to keep it about Berkeley hookups and help people find their ‘Drunken Cinderella,’ ” the admin explained. “If other people had this information, they could put certain people on blast and post names of the stories. We aren’t about that. Your secrets safe with us.”

Seems like the page could be a breeding ground for controversy, what with all the criticism various romance/hook-up apps have been getting lately. So has UC Berkeley Hook-Ups gotten any backlash yet?

“We’ve gotten criticism, but not about the things we’ve done, mainly about the comments being posted by other users,” the admin explained. “If a certain post seems to be too controversial, we will take action to make the situation more comfortable for our followers.”

“We don’t believe we are doing anything bad other than expressing the stories of college students that most people probably do not know. Berkeley has never been viewed as a ‘party school’ but it is a big university, and I feel like people have been a lot more low key about it because they feel embarrassed to talk about it,” The admin concluded.

What do you think? Is the UC Berkeley Hook-Ups page offensive? Humorous? A useful and thoughtful public service? Sound off!

Gift-giving isn’t just a seasonal affair between friends, families and acquaintances. The art of gift-giving is also conducted on a national scale with countries often sending each other big, weird and expensive gifts. Experts in all things gifts, Vanilla Reindeer put together some examples of these expensive and odd gifts that have been shared between… END_OF_DOCUMENT_TOKEN_TO_BE_REPLACED

There are lots of ways you can make Pres. Trump feel welcome: you can offer him coffee, or mow a penis into a field for him to view as his plane lands. The willie in question has been chopped by Born Eco ahead of the arrival of President Trump, who visited the UK Monday for… END_OF_DOCUMENT_TOKEN_TO_BE_REPLACED

The year isn’t even halfway over, yet Donald Trump has managed to make a fool of himself and our country countless times. From inviting the national college football champions, the Clemson Tigers, all the way to the White House for some McDonald’s to his to the dreaded results of Mueller’s investigation, it has been one… END_OF_DOCUMENT_TOKEN_TO_BE_REPLACED

Republicans have always said that when they gained control in Congress, they would work to overturn Roe v. Wade and here they are, cashing in on that promise one state at a time. So far, Alabama, Arkansas, Georgia, Kentucky, Missouri, and Ohio have all passed incredibly restrictive laws on abortions, making it illegal for women… END_OF_DOCUMENT_TOKEN_TO_BE_REPLACED

If you’re on Snapchat, then you’ve probably played around with (and were likely horrified by) their filter gender swap filters. While you’re probably using these filters to send hilarious pics to your friends, some guys using them to create Tinder profiles. What likely started out as a joke has quickly evolved, and these guys are… END_OF_DOCUMENT_TOKEN_TO_BE_REPLACED

“Milkshaking” is a hilarious trend in Britain where a milkshake is thrown at and ideally lands on a far-right politician or activist. The point of this nonviolence protest is to humiliate them without causing injury. Physical injury at least. There’s no doubt that milkshaking has led to a few bruised egos. Not only is this… END_OF_DOCUMENT_TOKEN_TO_BE_REPLACED