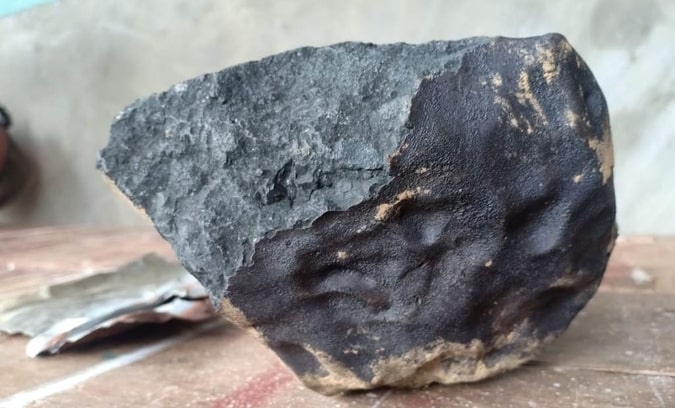 One afternoon a man, 33, discovered a piping hot meteorite just outside his house after it smashed through the roof of his residence.

According to reports, the rock from space, which weighed roughly 4.63 lbs, turned out to be worth around S$2.48 million ($1.85 million USD). Josua Hutagalung, a casket producer, was working on Aug. 1, 2020, when the rock crashed in his home, plummeting nearly 6 inches deep into the surface. Hutagalung informed local media that when he dug it out of the ground the meteorite was warm still. The space stone is said to be approx 4.5 billion years old.

The meteorite is categorized as CM1/2 carbonaceous Chondrite, an exceedingly rare variety. according to the Lunar and Planetary Institute. Because of its rareness, it is worth around S$1,149 (S$857) per gram, bringing Hutagalung’s rock worth to a whopping $1.85 million (S$2.48 million). One of Hutagalung’s sons actually instructed him not to sell the meteor, according to a meteoritical bulletin. The coffin manufacturer was hesitant to sell the rock initially, taking it as a sign of good fortune for his village and loved ones, selling a small fragment only of the space rock which after a few days broke off, weighing roughly 94.3g.

Though, by mid-September, he elected to sell off the rest of the roof meteorite to three distinct dealers, who sold them later to collectors. Hutagalung intends to use a portion of the funds to erect a church in his community, according to reports. The dad of three told local reporters: “I have also always wanted a daughter, and I hope this is a sign that I will be lucky enough now to have one.”

Meteorite Used As Doorstop For 30 Years Recently Valued At $100K

Last Year A 1,500 Ton Meteor Exploded Over Earth, And We We’re Clueless!

The moment he was inaugurated, immediate changes made by Biden made headlines across the country. These are many of the controversial issues and topics that were shunned and ridiculed by the former administration. Americans can finally breathe a sigh of relief that these concerns have finally reached government policies. It seems clear that Biden has been… END_OF_DOCUMENT_TOKEN_TO_BE_REPLACED

Presidential pardons are one and many in the history of the US. There are many times when US Presidents granted reprieves for their citizen’s misdeeds. The US President may grant a pardon for any individual, including himself, for any crimes done against the country and its citizens. This issue of Presidential pardons has been trending… END_OF_DOCUMENT_TOKEN_TO_BE_REPLACED