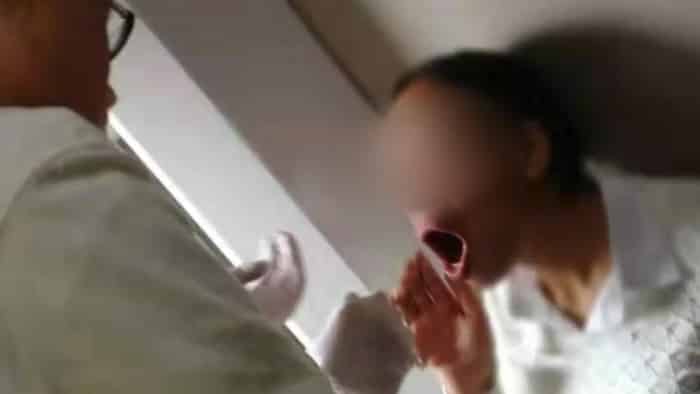 One woman in China enjoyed a laugh so powerful, so monumental, so earth-shatteringly tremendous – that it actually dislocated her jaw.

The highlighted laugh occurred on a high-speed train. Though, the laugh was soon ceased when the lady dislocated her jaw, leaving her mouth suspended open. Lucky for her, Doctor Luo Wensheng – had boarded train number G2938, when a pressing appeal for medical help was broadcast via the carriages. He stated: “I was resting when I heard an announcement asking whether there were any doctors [onboard]. I rushed over and found the passenger unable to speak or close her mouth. She was drooling, so I initially thought she had had a stroke. But I took her blood pressure, then asked her some questions, and learned that she had actually dislocated her jaw.

“I warned her that I wasn’t an expert, but I knew how to do the procedure. I also told her there was a chance I wouldn’t be able to set it,” he added. “The patient was quite nervous and her facial muscles were all very tense, so it failed on the first attempt. I advised her to go to a hospital instead, but train staff told us it would be another hour. The passenger became very agitated and wanted her jaw set right away, so I agreed to try again.” Fortuitously, the physician was able to reinstate the jaw. Dr Wensheng furthered: “I did it while she was distracted, and luckily it went back in place. The passenger revealed that she had dislocated her jaw in the past due to repeatedly vomiting during pregnancy. If you’ve dislocated your jaw in the past, laughing, yawning or even just opening your mouth too wide can lead to it happening again.”

Gift-giving isn’t just a seasonal affair between friends, families and acquaintances. The art of gift-giving is also conducted on a national scale with countries often sending each other big, weird and expensive gifts. Experts in all things gifts, Vanilla Reindeer put together some examples of these expensive and odd gifts that have been shared between… END_OF_DOCUMENT_TOKEN_TO_BE_REPLACED

There are lots of ways you can make Pres. Trump feel welcome: you can offer him coffee, or mow a penis into a field for him to view as his plane lands. The willie in question has been chopped by Born Eco ahead of the arrival of President Trump, who visited the UK Monday for… END_OF_DOCUMENT_TOKEN_TO_BE_REPLACED

The year isn’t even halfway over, yet Donald Trump has managed to make a fool of himself and our country countless times. From inviting the national college football champions, the Clemson Tigers, all the way to the White House for some McDonald’s to his to the dreaded results of Mueller’s investigation, it has been one… END_OF_DOCUMENT_TOKEN_TO_BE_REPLACED

Republicans have always said that when they gained control in Congress, they would work to overturn Roe v. Wade and here they are, cashing in on that promise one state at a time. So far, Alabama, Arkansas, Georgia, Kentucky, Missouri, and Ohio have all passed incredibly restrictive laws on abortions, making it illegal for women… END_OF_DOCUMENT_TOKEN_TO_BE_REPLACED

If you’re on Snapchat, then you’ve probably played around with (and were likely horrified by) their filter gender swap filters. While you’re probably using these filters to send hilarious pics to your friends, some guys using them to create Tinder profiles. What likely started out as a joke has quickly evolved, and these guys are… END_OF_DOCUMENT_TOKEN_TO_BE_REPLACED

“Milkshaking” is a hilarious trend in Britain where a milkshake is thrown at and ideally lands on a far-right politician or activist. The point of this nonviolence protest is to humiliate them without causing injury. Physical injury at least. There’s no doubt that milkshaking has led to a few bruised egos. Not only is this… END_OF_DOCUMENT_TOKEN_TO_BE_REPLACED