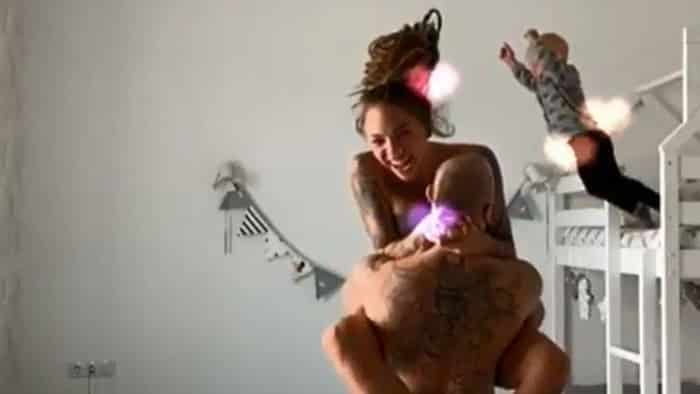 A chilling video has surfaced displaying a toddler leaping from the top bunk whilst trying to imitate his dad and mom, who were taping for a TikTok video.

Gabriel Bonor, 3, at his family home was standing on the top bunk whilst his mother and father (Andrei Bonor and Sveta Ananas) were filming a playful clip for the social media video app TikTok. The logic for the TikTok video was that Ananas would leap into Bonor’s arms and it would be recorded in slow motion. The issue was, as soon as Ananas hopped into the air, the Knievel baby chose to follow suit. Gabriel crouched down and hurled himself head first from the peak height of the bunk beds! It’s alarming to watch, despite the child clearly appearing to be having the time of his short life.

Of course – this is on the worldwide web, after all – the baby’s parents have endured some pretty rigid criticism for their behavior. One internet user stated: “Wow! That poor kid. Parents are too self-absorbed that they neglect their child. The child may have had a smile on his face, but this doesn’t excuse the parents being neglectful. What if your son really injured himself? Shame on both of you.” Well, it’s quite challenging to maintain a watchful eye over your baby the entire time, especially if they’re about to attempt something amazingly unpredictable like – say – launch themselves from a towering height. Additionally, the baby appeared to have a grand time; which is what matters most, right?

Why You Shouldn’t Throw Cheese At Your Baby

3-Year-Old Girl Gives Pony Shower In The Bathroom, By Herself [Video]

Gift-giving isn’t just a seasonal affair between friends, families and acquaintances. The art of gift-giving is also conducted on a national scale with countries often sending each other big, weird and expensive gifts. Experts in all things gifts, Vanilla Reindeer put together some examples of these expensive and odd gifts that have been shared between… END_OF_DOCUMENT_TOKEN_TO_BE_REPLACED

There are lots of ways you can make Pres. Trump feel welcome: you can offer him coffee, or mow a penis into a field for him to view as his plane lands. The willie in question has been chopped by Born Eco ahead of the arrival of President Trump, who visited the UK Monday for… END_OF_DOCUMENT_TOKEN_TO_BE_REPLACED

The year isn’t even halfway over, yet Donald Trump has managed to make a fool of himself and our country countless times. From inviting the national college football champions, the Clemson Tigers, all the way to the White House for some McDonald’s to his to the dreaded results of Mueller’s investigation, it has been one… END_OF_DOCUMENT_TOKEN_TO_BE_REPLACED

Republicans have always said that when they gained control in Congress, they would work to overturn Roe v. Wade and here they are, cashing in on that promise one state at a time. So far, Alabama, Arkansas, Georgia, Kentucky, Missouri, and Ohio have all passed incredibly restrictive laws on abortions, making it illegal for women… END_OF_DOCUMENT_TOKEN_TO_BE_REPLACED

If you’re on Snapchat, then you’ve probably played around with (and were likely horrified by) their filter gender swap filters. While you’re probably using these filters to send hilarious pics to your friends, some guys using them to create Tinder profiles. What likely started out as a joke has quickly evolved, and these guys are… END_OF_DOCUMENT_TOKEN_TO_BE_REPLACED

“Milkshaking” is a hilarious trend in Britain where a milkshake is thrown at and ideally lands on a far-right politician or activist. The point of this nonviolence protest is to humiliate them without causing injury. Physical injury at least. There’s no doubt that milkshaking has led to a few bruised egos. Not only is this… END_OF_DOCUMENT_TOKEN_TO_BE_REPLACED