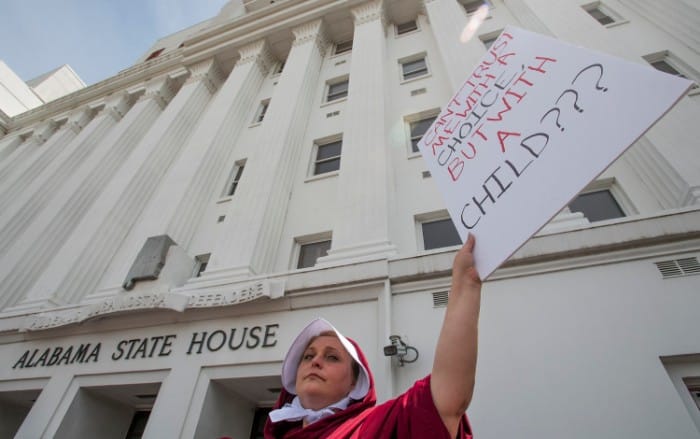 Republicans have always said that when they gained control in Congress, they would work to overturn Roe v. Wade and here they are, cashing in on that promise one state at a time. So far, Alabama, Arkansas, Georgia, Kentucky, Missouri, and Ohio have all passed incredibly restrictive laws on abortions, making it illegal for women to receive the medical procedure after six weeks of fertilization. For those who don’t understand the female reproductive system, knowing that you’re pregnant so soon is virtually impossible. This has sparked protests around the country, leaving us with some truly epic photos for the history books.

1. The Use Of Wire Hangers

The metal wire hanger has become a frightening symbol of the women’s movement as it represents all of the deaths that occurred before we had access to safe and legal abortions. They were once the only solution to unwanted pregnancies, and thousands of women bled to death because of this, most of who were women of color. What conservatives don’t understand is that women will always find a way to get rid of unwanted pregnancies and that without access to safe abortions, death rates of both women and unborn babies will increase as a result.

2. Abortion Rates Have Gone Down

Prior to Trump’s presidency, instead of attacking women’s reproductive rights the government focused on making contraceptives more available and providing better sex education. This led to a significant decrease in abortion rates, proving that we were moving in the right direction. According to the Centers for Disease Control and Prevention, abortion rates went down by 26 percent between 2006 and 2015, the lowest level on record. All of these studies and numbers apparently mean nothing to the alt-right though.

While it may not seem like it at this moment, most Americans support a woman’s right to choose. A recent survey done by the Kaiser Family Foundation found that 67 percent of people polled don’t want to overturn Roe v. Wade. Nearly half of the Republicans that were polled agreed, making it more obvious than ever that this is a governmental ploy.

4. Most Women Who Get Abortions Already Have Kids

While the far-right love to depict the women looking to get abortions as selfish women who simply don’t want to deal with having to raise a child, that’s not usually the case. Most women who seek out abortions already have kids. Taking care of a baby is expensive, and our country doesn’t exactly set women up for success after giving birth. Most have to go back to work immediately because they can’t afford not to, and our country doesn’t have proper maternity leave laws. Instead of fighting to end abortion, conservatives should be fighting for access to free healthcare and longer paid maternity leave so that women don’t have to choose between an abortion and being able to afford to feed their other children.

5. None Of These Recent Heartbeat Bills Are In Effect Yet

While it’s shocking to hear that abortion ban bills have successfully made it this far in the process, they aren’t active just yet. They have all either been challenged in court or are expected to be challenged soon, including the most recent Alabama law that was passed. Hopefully, these protests will inspire them to be overturned. Otherwise, women in these states, as well as anyone who helps them, will start to receive prison sentences at alarming rates.

6. Women In Georgia Can’t Have Miscarriages

Each state’s “heartbeat” law is slightly different and intentionally confusing. The one passed in Georgia and several other states can be interpreted as criminalizing both miscarriages and abortions. This is likely left vague due to the fact that there’s no medical way to determine the difference between the two, and they want to prevent women from being able to lie after having an abortion. The only problem with this is, women can’t magically stop their bodies from having a miscarriage. If we could, I assure you in most cases we would.

Lawyers and professionals who’ve been studying these abortion ban bills, specifically Georgia’s, have said that women likely won’t be prosecuted for having a miscarriage. They will, however, probably have to be part of a criminal investigation looking at their doctors for possibly performing an illegal abortion. Miscarriage is incredibly common, so if these bills come into effect we will likely see the courts jammed up with nonsense. On top of that, women who are devastated after the loss of a child will then have to be further traumatized by an investigation. Sounds like a shitty deal if you ask me.

8. If Roe v. Wade Is Overturned

The goal of these abortion ban bills is to create a better case for overturning Roe v. Wade. Abortion rights advocates are asking that states be proactive by loosening the regulations on abortion laws in liberal states and get ahead of the problem. This will ensure that if Roe v. Wade ends up being overturned and each state becomes responsible for creating their own abortion laws that there won’t be a gap in abortion access. Women will still have their right to choose in most states. For example, in January New York passed a Reproductive Health Act that allows abortions after 24 weeks if the fetus is non-viable or the patient’s health is at risk.

One of the lies the alt-right likes to spread is how often late-term abortions occur. That’s not actually a thing. The only reason women have abortions later than the law allows is if her life is at risk or the baby dies in the womb. Even then, they likely do everything they can to save both the mother and the child, but it’s not an easy decision. No matter what the alt-right says, doctors don’t cut live babies out of these women and leave them to die on the operating table or murder them with their bare hands. Abortion occurs long before a fetus can survive outside of the womb, but the right-wing just loves to fill people’s heads with a bunch of nonsense in order to get their way.

Memes That Explain Why An #AbortionBan Makes No Sense

#AbortionBan Tweets Explain How This Law Will Affect Men As Well