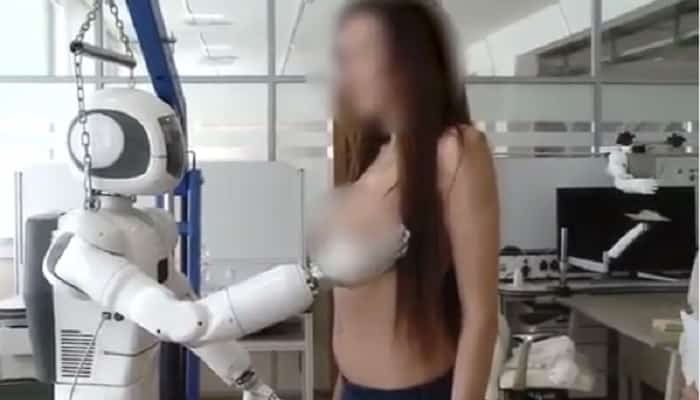 We live in truly wonderful times when we now have the technology available to make everyone’s lives on Earth much better. Robotics for that matter has gone leaps and bounds in development; so much so, that they can now be used to detect fake breasts among women… courtesy of some robotics engineer students from Russia.

A group of brilliant robotics engineering students from Russia’s Kazan Federal University sure know their… priorities. They were responsible for the creation of the said robot. The robot was made for the purpose of feeling the breasts of females so that detecting whether they have breast implants or not can be easier… because for some reason, that totally matters.

A demonstration of the robot’s fake breasts detection capabilities in action was also documented on film by a local student channel, take a look:

“Please undress. Its’ going to be a bit cold, but it’s for science,” says one of the students in Russian.

The robot was programmed with parameters to gauge a female human breasts’ “symmetricity, elasticity, and flexibility.” While it can, in theory, be used in the future for automated breast exams that can potentially detect breast cancer, we already have doctors for that, don’t we?

Meanwhile, for a more thorough checkup of the breast tissue, automated breast ultrasounds have already been invented and can check denser breasts better than human doctors can (or even robots for that matter). So, ultimately, the robo-mammologist they invented is just a one-trick pony. Not to mention one usually doesn’t need to touch to find out fake breasts?

You Can Now Get Six Pack Abs Through A Surgery

The moment he was inaugurated, immediate changes made by Biden made headlines across the country. These are many of the controversial issues and topics that were shunned and ridiculed by the former administration. Americans can finally breathe a sigh of relief that these concerns have finally reached government policies. It seems clear that Biden has been… END_OF_DOCUMENT_TOKEN_TO_BE_REPLACED

Presidential pardons are one and many in the history of the US. There are many times when US Presidents granted reprieves for their citizen’s misdeeds. The US President may grant a pardon for any individual, including himself, for any crimes done against the country and its citizens. This issue of Presidential pardons has been trending… END_OF_DOCUMENT_TOKEN_TO_BE_REPLACED