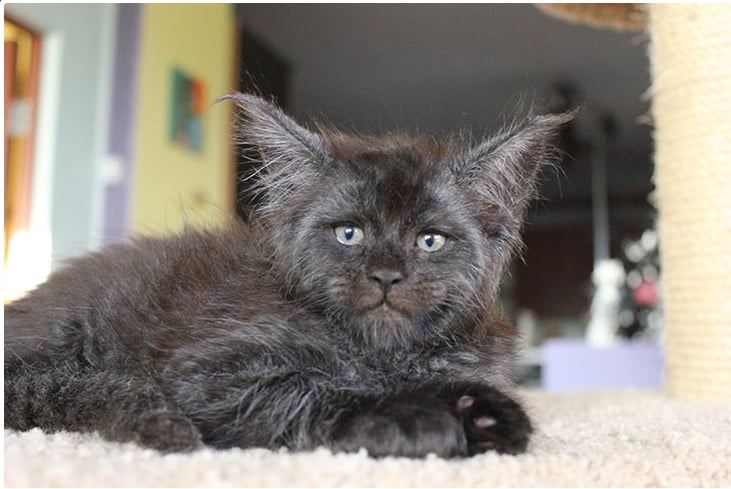 Well, well, look what the cat dragged in– a human face. No, seriously, there is this cat online which was first spotted in Instagram and she totally has a human face. The cat–astrophic part is, this cute little feline is driving the internet insane with how human she looks like. Who would have thought Maine Coon cat breeds have a human side to them?

That is not her above, but a video from Instagram shared by a user named catsvillcounty captured the attention of the internet a few days ago. Russian user catsvillcounty posted a short clip of their Maine Coon kitten named Valkyrie whose face bears an uncanny resemblance to a human being’s. Check her out below.

So? What do you guys think? Cat with a human face? Or a human with a cat face? Unless someone’s been busy splicing together cat and human DNA, then natural genetics can be quite a weird phenomenon sometimes.

If you actually look closer, she will start to look like Mike Myer’s version of

or Jim Carrey’s The Grinch

It can be quite difficult to pinpoint what exactly makes Valkyrie look almost human. Those eyes definitely add up to the human features. Valkyrie’s owner, Catsvill County is actually a cat breeder and even has their own website. There you can find even more pictures of Valkyrie, take a look if you don’t mind having something stare the living abyss out of your soul.

Now that the election results are almost final, we all want to ask what’s going to happen to Donald Trump after leaving the office? All US Presidents inevitably reach the point where they leave the White House.  Besides, the constitution states that all US Presidents are subject to a two-term limit. What do former presidents… END_OF_DOCUMENT_TOKEN_TO_BE_REPLACED

This is the first time in modern history that the US held presidential elections in the middle of a pandemic. In truth, the US elections may have overshadowed COVID-19 and the side effects are limitless. America is facing a tough crisis of discontentment with the current administration. An understandable case but a situation that may… END_OF_DOCUMENT_TOKEN_TO_BE_REPLACED

America’s political climate has been seeing records of changes over the past few decades. However, US election results record a list of surprising firsts for the first time in a long time. With the power of the youth overpowering the US election results, we see how differently they see the world. It shows how inclusivity… END_OF_DOCUMENT_TOKEN_TO_BE_REPLACED