Following Germany’s win over Argentina on Sunday to secure their 4th World Cup title a new footballing myth has been gathering pace across the internet saying that the number seven was a prominent number in nearly all their games and results since the tournament started.

I’m not one to pay any kind of attention to these kind of internet myths and I detest chain emails and similar chain messages on social media but even these numbers below are quite an eye opener:

-G is the 7th letter of alphabet, and GERMANY starts with letter G
-The name GERMANY contains 7 letters
-GERMANY was in group G which is number 7 using number code
-GERMANY ended group stages with 7 points
-GERMANY scored 7 goals in group stages-4 vs Portugal, 2 vs Ghana and 1 vs USA
-GERMANY scored 7 goals against the host Nation ‘Brazil’ in their home soil
-GERMANY will be playing their 7th match of the WorldCup2014 against Argentina today
-And obviously this is the 7th month of the year 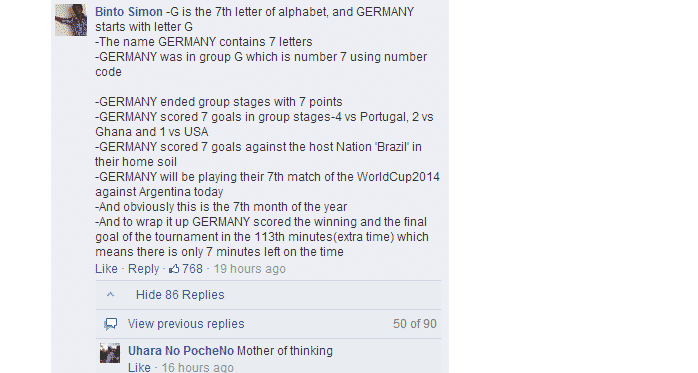